IAF members in South America are actively promoting a better gender balance in Aikido. Two international events have been recently successfully held on the continent, one in Buenos Aires, Argentina, another one in Santiago, Chile.

On the last weekend of June, 29th/30th, the 4th International Female Instructor Seminar took place in the OAK Dojo, in Buenos Aires. The event has been initiated and organized by Asociación Argentina de Aikido, with 11 instructors from national and international federations.

The seminar was open to everybody, beyond any border of styles, genders and countries. This creates good relationships between the federations as well as individual practitioners. It also stimulates the interest to other federations and groups to participate in the next editions.

It was great to have seniors' support such as Luis Guz (6th dan, Federación Aikikai Argentina), who accompanied his daughter Andrea Guz (5th dan) and also joined the practice. This year the number of male participants exceeded that of female. The stable number of participants (above 80) shows that the event has become a new tradition.

The Argentinian initiative has been slowly but steadily taken up by neighbor countries: Liliana González Beltrán (3rd dan, Federación Colombiana de Aikido) was sent to Buenos Aires as the first female instructor from her Colombian federation. Aikikai Chile has also sent a delegation to this event, which took form as another international female instructor seminar in Santiago. 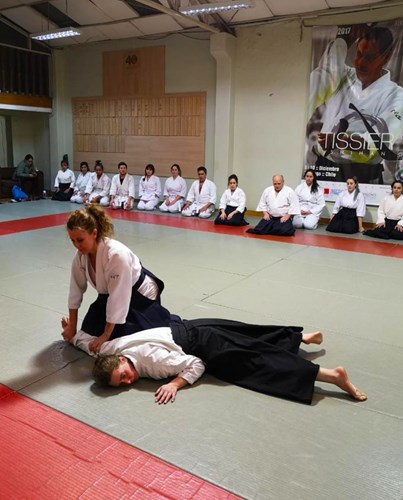 In the following week, 1st/2nd of July, the seminar conducted by 3 female instructors was held in the center of Santiago, Chile. The event was organized by Aikiai Chile, one of the member organizations of the UOCHA, and open to everybody. The participation fee was low so that all the Chilian members could feel welcomed. With Satomi Ishikawa (5th dan, Aikido Bond Netherland) as the head instructor, Karen Leal (3rd dan, Aikikai Chile) and Maia Méndez (2nd dan, Aikikai Chile) facilitated the seminar.

Though the seminar was during the weekdays, it was well visited by members from different dojos and schools. This shows that the seminar was considered by the participants as an opportunity to attend an international seminar with a high level instructor, regardless of gender.

The focus of the seminar was on purity of techniques: participants agreed that, regardless of body size, pure techniques allow one to handle every size of people, even double of one's own weight. The instructors' impact on the participants was very positive, urging men to support these events where women have an active participation.

Organizing this event was initiated by Jorge Rojo shihan (7th dan, Aikikai Chile) and was carried out great deal by the female coordinating team. The success of this first event will certainly bring a better gender balance on and around tatami in Chile.