The Disability Working Group in Action

For the first time, two wheelchair using Aikido teachers taught together in Aikido clinics in Europe. Lydia Zijdel, the Chairperson of the Disability Working Group of the IAF, from Netherland, and Molly Hale, member of the same working group, from USA, organized a tour where they taught together in Netherland. This event was organized in cooperation with Aikikai Netherland, under the aegis of IAF.

“Everyone has a spirit that can be refined, a body that can be trained in some manner, a suitable path to follow.”
—Morihei Ueshiba

Lydia Zijdel (Sandan) started with Erik Louw Shihan, with the assistance of Wilko Vriesman Shihan in Amsterdam, in March 1983. This was only 6 months after a car accident whereby her cervical spine and spinal cord were damaged. Not only learning on the mat the beauty of Aikido, but also realizing its effect on her rehabilitation to sit, to balance her body and becoming more at ease with the physical abilities she had lost. Since then, Lydia became a driving force in Europe for the inclusion of people with a disability within the Aikido and Martial Arts Community.

In 2010 she become the IAF Ambassador for Aikido in the Beijing, Combat Games. The Disability Working Group of the IAF, chaired by Lydia Zydel, is in operation since 2017. She is also one of the experts and co-authors of “PRIME: A Practical Guide for Coaches”, a handbook for martial arts teachers on how to teach disabled persons. 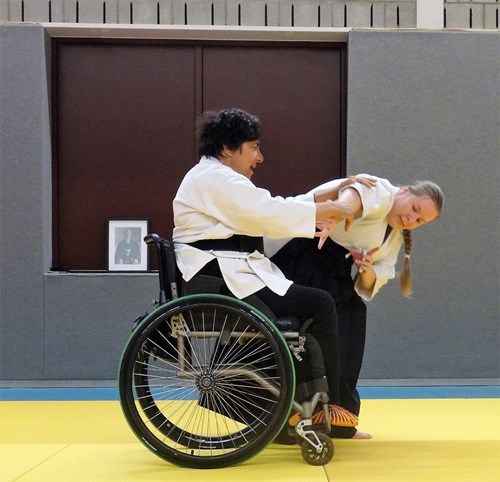 Molly Hale began with Aikido in September 1984 at Aikido West in Redwood City, California, USA. She became the senior instructor of the Aikido West Children's program in 1988 and instructor of Oracle Aikido Club in 1991.
Her Sandan exam in 1995 was postponed when an automobile incident damaged her cervical spine and spinal cord. She returned to the mat in March 1996, working with the physicality she had. Molly demonstrated in September 2013 for Yondan and was awarded her 4th Dan certificate from Hombu Dojo. 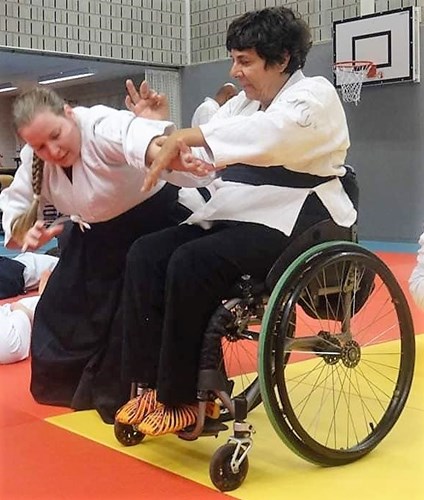 Since 2018, she is one of the members of the IAF Working Group on Disabilities, with special permission – as non USAF member, to join this group. Beside the tour in Netherland, Molly also had a private teaching session in France, to one of the dojos of FFAAA (Federation Francaise d'Aikido, Aikibudo et Affinitaires).

Both teaching sessions were organized in November last year. There were approximately 200 participants, men and women, of different ages.

If you or your dojo/organization would like to know more about the IAF Working Group on Disability, please contact us through aikidoability.lydia@gmail.com or through the IAF contact address.